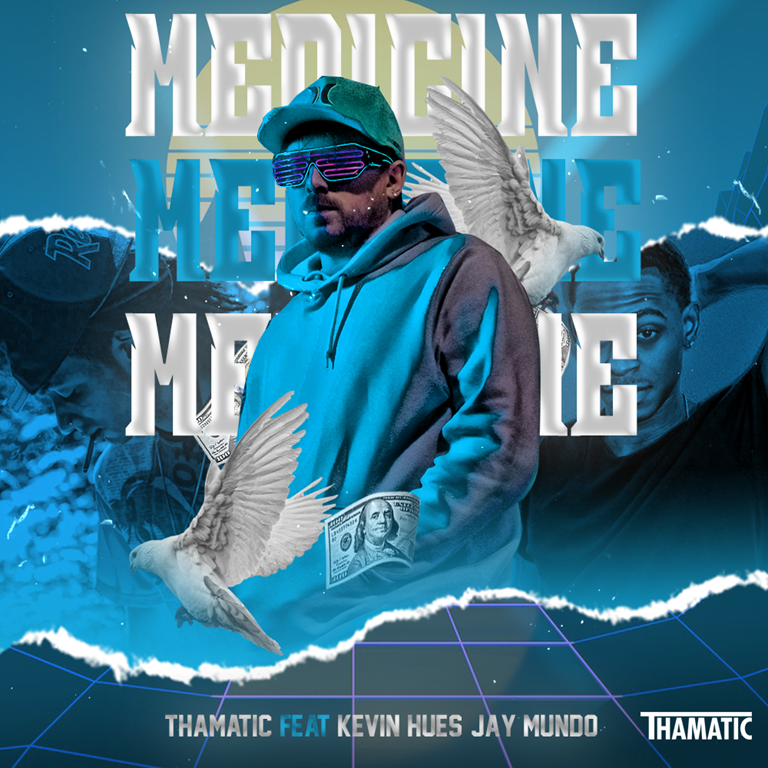 After the success of the EDM futuristic concept EP “The Cyberpunk Trilogy“, Thamatic is making a mixtape to band together and collaborate with other musicians.

MEDICINE is a CHICAGO artist collaboration with Thamatic, Kevin Hues and Jay Mundo.

They have an innate sense of both the future and the past. An air of immediacy and familiarity permeates through their music, as their songs carry themselves nobly. Timeless and mercurial, they are the ghosts of rock and roll.

“MEDICINE” is a CHICAGO artist collaboration with Thamatic, Kevin Hues and Jay Mundo.

Jay Mundo is a founding member of We Live Young Forever from Chicago, Illinois, Jay Mundo is a rapper, singer, songwriter, artist and entrepreneur. Jay began working in 2012 as a producer for local artists in the Chicagoland area, and founded We Live Young Forever with his friends the same year, gaining the attention of several prominent local artists. The group has since evolved to include E Kubed, stonedwaffle, Joseph Earwicker, and Shai. Jay released his first mixtape ‘2017: The Mixtape’ in late 2017, and has continued to be actively involved in music. Jay’s originality, cleverness and artistic vision make him one of hip hop’s most diverse artists.

From Chicago, Kevin Hues may be the next Kanye West with his impeccable vocal hooks and producing skills. Kevin sung and created the chorus for Medicine.

Over the course of his career, Kevin Hues has amassed more than 11 million streams worldwide with his music on YouTube as a producer and artist.

His production can be heard worldwide, but most notably on his self-produced “Eclipse EP” and on “Love EP” by DJ Caleeb.

MEDICINE is a CHICAGO artist collaboration with Thamatic, Kevin Hues and Jay Mundo. It’s the story of what it’s like to be in the trap. Literally trapped, people need medicine to get through their life.

‘Medicine’ is out now on streaming services.